In Ascension, each player starts off with their own deck, containing the exact same 10 cards. Each round of the game sees you drawing a hand of 5 cards from your deck and using them to buy or ’defeat’ other cards from an ever changing selection in the middle of the play area. Defeating a monster gives you honour, buying a card means you get to add it to your deck, to use on a later turn. Each card in your hand gives you ’currency’ in one form or another, or allows you to perform an action such as drawing extra cards. As the game progresses you build up your deck from the same pool of cards as the other players, so nobody is at a disadvantage. Your only obstacles are luck and other players trying to prevent you getting the cards you need.

Those are the basics of the game: draw a hand from your deck, perform actions and spend runes or power to get more cards, earn honour and perhaps hinder other players. Keep going until all of the available honour has been expended, and then count up to see who got the most. There’s lots of room for strategy: do you go power-heavy and work on attacking monsters to gain power? Do you just try and buy as many high value cards as you can? Do you go for actions that let you draw more cards and work through your deck faster? The game feels deep but is easy to pick up and play.

Ascension on iOS is universal, so it runs on both iPad and iPhone. I feel that it’s a much more enjoyable experience on the iPad, as the larger screen really gives you more room to play with (quite literally). 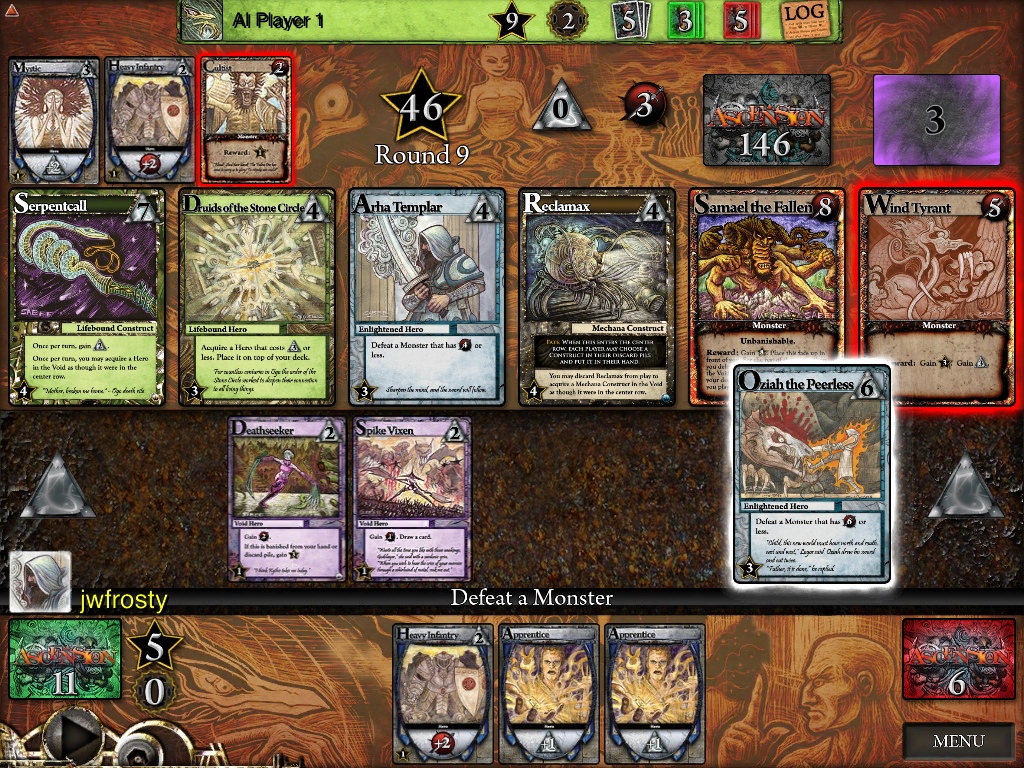 The app is really well made. It’s extremely responsive, with smooth animations, fun sound effects, and all the card artwork from the original game. There’s a great tutorial to get you up to speed and a complete rulebook if you want to check up on the rules.

Singleplayer works really well, with a couple of AI difficulty levels to choose from, but multiplayer is where Ascension really shines. You can play against up to 3 opponents, either randomly selected or chosen from your Game Center friends. The game very cleverly and seamlessly switches between asynchronous turn-based play (where you’re notified when it’s your go and you can take as long as you like), to real time updates if two players are both online. There’s a small status indicator next to each player’s name which tells you if they’re offline, idle, or actively participating in your game. If they’re online at the same time as you, you can see each card move around the screen as soon as they play it. If they’re offline, the game will notify them when you’re finished taking your turn. It’s very well done. In fact, it’s one of the best multiplayer experiences I’ve seen on iOS.

All in all, Ascension is a really enjoyable card game. For £2.99, you get a universal app which contains all the cards from the main Ascension game. For an extra £1.99 in-app purchase you can also get the first expansion pack; Return of the Fallen. The iOS version is well worth the asking price, and if you have any interest in board games (or would just like a fun multiplayer game you can sink your teeth into) I’d highly recommend you check it out.