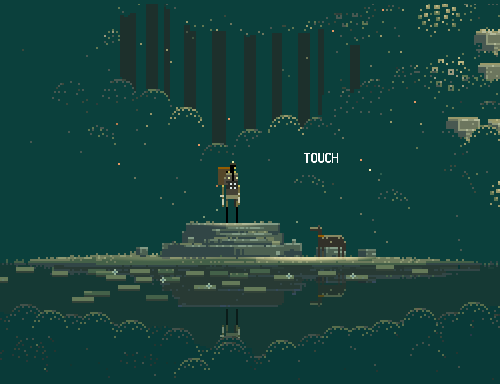 S&S EP references elements of geek culture and video games of the past to create a unique experience that still manages to feel comfortably familiar at the same time. You play a lone warrior, out to destroy the Megatome (a book of unimaginable power) along with the ancient evil that haunts the legendary mountain of Mingi Taw. The Legend of Zelda series and Shadow of the Colossus stand out as two of the biggest influences, or at least two games against which it is easy to draw parallels. Like Zelda, S&S: EP’s mute lead character’s ultimate goal involves collecting three sacred triangles that together form the ‘Trigon Trifecta’. Like Colossus, there are references to mysterious in-game mythology, fights with ancient creatures (leaving the player feeling morally conflicted), and a main character who gets weaker as they continue their quest. The game features beautiful pixel art graphics, and an outstanding original score. It’s clear that a lot of love was poured into this game.

Speaking of the score: the soundtrack is fantastic, and an integral part of the game. It’s available to download from Bandcamp or iTunes and has even been released on vinyl. It’s one of the best game soundtracks I’ve ever heard; kind of a mix between folk and chiptunes and lots more besides. You can listen to most of it for free on Bandcamp, so give it a spin. However, I think it sounds all the better once you’ve experienced it in-game. Some of the pieces are perfectly written and timed to coincide with sections of the game, and so I think you get something extra out of them once you’ve experienced their corresponding visual accompaniments. The game’s main antagonist, the Deathless Spectre, evokes an actual feeling of panic whenever it materializes onscreen which I think is in no small part due to the music that coincides its appearance. Sword & Sworcery EP really deserves to be played wearing headphones. 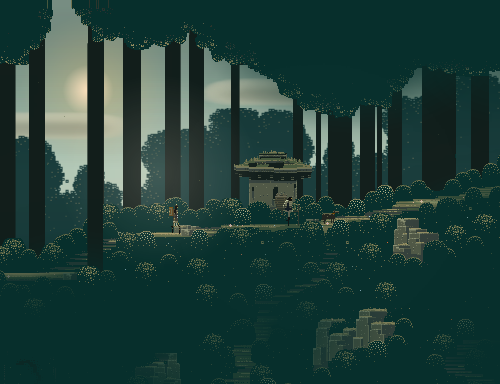 In fact, the whole game deserves your full attention when you play, as you’ll get far more out of it. The story unfolds in multiple chapters, like the acts of a play, even down to a triumphant musical cue and the literal closing of curtains when you finish an act. The story’s narrator appears at the end of an act to sum up what you’ve achieved and what is yet to come. The first act is rather short – something of an introduction to the rest of the game – and the narrator actually tells you to take a break once it’s over. It’s a nice way to spread the game out over multiple sittings and it frames the story really well. The presentation values are top notch, and whilst it may sound hyperbolic I do think S&S EP really is more of an experience than a traditional game.

As a touchscreen-controlled game designed for iOS devices, S:S&S EP succeeds brilliantly. It doesn’t attempt to crowbar ‘traditional’ controls into somewhere they don’t fit (no onscreen d-pads) instead you simply either touch and hold or double-tap wherever you want your character to move. You can also pinch to zoom and pan around the screen. It works wonderfully and feels effortless. The majority of the game takes place in landscape orientation, but for sword fights you must rotate the device into portrait to take out your sword and shield. This reveals two thumb buttons at the bottom of the screen: one for your sword, and one for your shield. It couldn’t get much simpler. It’s nice to see a developer who understands the strengths and weaknesses of a touch-based control system. 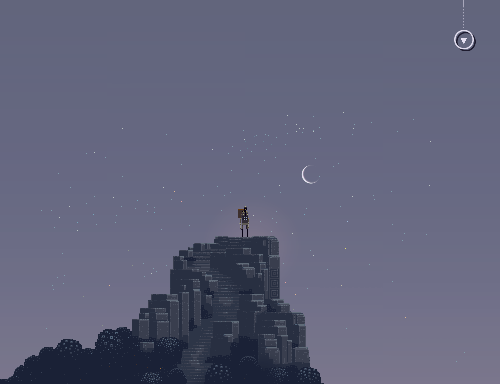 Sword & Sworcery is without a doubt one of the best games on iOS. But more than that, it is one of my favourite games of all time. Unlike a lot of iOS titles, it’s not a throwaway arcade experience but an adventure that will stick with you long after you finish playing. It draws you in to its little world through beautiful pixel graphics, a stunning soundtrack, a believable world and characters, and slick presentation throughout. I highly recommend it. It’s available now on the iOS App Store as either a universal version for iPad & iPhone, or as a slightly cheaper iPhone-only version.