I’ve recently become somewhat addicted to Minecraft – the hit indie game that’s currently earning its creator over £100,000 a day. I find it quite hard to summarise what I find so brilliant about Minecraft, so I’ve collected together a few links to articles or videos that give a good idea of why Minecraft is awesome, and why you should be playing it right now. 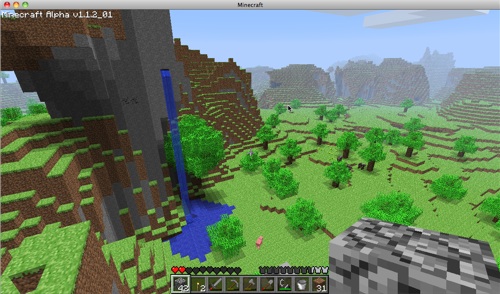 As a brief introduction, the single player game of Minecraft is all about adventuring and carving out an existence for yourself in a randomly generated, nearly-infinitely large world. It might be mountainous, islandy, foresty, snowy; you must harvest resources and built yourself tools and shelter; there’ll likely be huge underground cave systems for you to explore, containing precious minerals for you to mine, and monsters lurking in the darkness. It’s all about survival and exploring, in a world that you can literally shape as you please – pretty much every single block in the world can be destroyed, moved, or placed by you.

First up, there’s a brilliant series of five articles over at Rock, Paper, Shotgun 1 called Mine the Gap. The author had never played Minecraft before, and charts his progress through the game for the first few days. He very quickly falls in love with it, and does a good job of conveying what it’s like to play Minecraft. I could quote pretty much all of the articles, but I’ve tried to pick out some of my favourite bits:

At this point I need to state just how unspeakably fun all this is. Shredding and re-assembling the game world is quick, tactile and satisfying. The entireity of MineCraft taps directly into that part of your mind that made it so fun to build forts out of sofa cushions as a kid. Even digging a hole in MineCraft brings on an inexplicable thrill of freedom and panic. It’s embarrassing.

Spelunking, it turns out, is kind of breathtaking. Everything- the risk of encountering monsters, the natural cave formations, the chance of discovering something unusual- comes together to form a thrilling whole.

MineCraft’s randomised caves are some of the most spellbinding locales I’ve ever encountered in a videogame, and a large part of that, I think, is because you’re always at risk of getting lost. It’s an omnipresent enemy you’re forever dueling with, and sometimes that means he gets the better of you. And that’s fun too.

Why aren’t there more games about exploring? I’m not talking learning the corners and shortcuts of some dull “open” world here. I’m talking about games which let you pick your way through a world that’s every bit as secretive, hostile and surprising as our own. I’m talking about letting the player get lost. I’m talking about making a world so tactile, so absorbing and so believable that an exciting discovery can be as simple as a big-ass tree.

We need more of this. Because this? This is brilliance. MineCraft is brilliance in such a simple, raw form that developers the world over should be smashing their heads on desks with a force usually reserved for heading footballs, simply because they didn’t do this first.

It took going on today’s expedition for me to realise it, but after a dozen hours I’ve already gotten more out of MineCraft than I get from most commercial games, so I’m just going to tell you straight up: You want to buy this game. It’s already fantastic, it’s still a long way from finished, it’s only €10 and once you’ve bought it, all future versions of MineCraft will be yours for free.

I encourage you to go over and read through these, starting with number one, of course:

Here’s all the articles: Mine the Gap on Rock, Paper, Shotgun

Next, a brilliantly made set of videos on YouTube called Expedition Minecraft!, from Sebastiaan de With, a designer from the Netherlands. He’s made 7 videos so far which show him adventuring in Minecraft, starting out from scratch in a new world. I watched these before I bought Minecraft myself, and at least the first video or two almost act as a nice little tutorial of how you play the game – before watching these, I didn’t really ‘get’ what it was all about. It’s also odd how strangely compelling and addictive it can be just watching someone else play. Each video’s about 15 minutes long.

Finally, here’s an utterly hilarious video of someone attempting to do a nice little tutorial, but not quite getting the results they were after…

Seriously – if you love games, I can’t see how you can’t enjoy Minecraft. I’ve already got far more out of the game than the €9.95 I paid for it. You can play it in your browser or download the client, and it works on Mac OS X, Windows, and Linux. It currently costs €9.95 while it’s in alpha, and will be double that whenever it’s finally released.

P.S. If you do get it, I think you’ll likely find the Minecraft Wiki very useful. In particular, it has ‘recipes’ for all the tools and items you can build.