These days, my primary computer is a 15″ MacBook Pro. It’s an amazing machine, but sometimes those 15″ can be a little unwieldy (yes, that’s what she said).

Apple used to make a small, very portable laptop: the 12″ PowerBook, which was unfortunately retired during Apple’s switch to the Intel platform. However, the transition did introduce the potential ability to run Mac OS X natively on non-Apple hardware. Whilst Apple don’t (currently) make their own netbook1, a big community has sprung up around running OS X on non-Apple netbooks. I should note from the outset that installing OS X on non-Apple hardware potentially violates the OS X EULA. If you’re going to do this, in the very least ensure you own a legal copy of Mac OS X Leopard.

The current netbook au jour is the Dell Mini 9. BoingBoing’s compatibility list shows it as the only device that currently supports every piece of hardware2 under OS X. And it does. 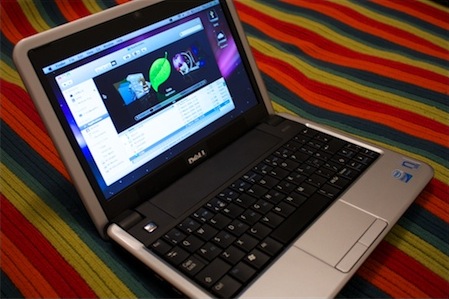 I bit the bullet and bought a Mini 9, which finally turned up a couple of weeks ago. It has a 1.6Ghz Intel Atom processor, 1GB RAM (user upgradable to 2GB), and a 16GB SSD drive. I ordered it with Ubuntu pre-installed – and let me tell you, this thing is fast. Ubuntu boot time was a respectable 30 seconds, and the user interface felt extremely responsive. In fact, I’m not sure I’ve ever seen OpenOffice load so quickly. I’ll go as far as to say that out-of-the-box, this was the best experience I’ve ever had with Ubuntu – things just worked, which has rarely been the case for me with desktop Linux before. I put an SD card in the Mini 9’s SD reader, and it instantly mounted on the desktop; I plugged an external monitor into the Mini 9’s VGA port, opened the display settings, and was able to rearrange the monitors / change resolutions / etc; Flash in the browser worked without needing to install or fiddle with anything; heck, even wifi just worked. If you’re not comfortable with sticking OS X on there, the Dell Mini 9 running Ubuntu is a lovely machine.

So, back to OS X. Aside from a few minor niggles due to my hardware setup3, installation was a breeze. This is one of the things that makes the Mini 9 such an attractive proposition as a Mac netbook – all of the wrinkles have been ironed out of the process by the clever group of people over at http://mydellmini.com. I won’t re-iterate the process in full here (I followed this guide), but in short it’s a case of:

It’s fairly straightforward, as long as you follow the guide. I had the odd problem crop up now and again, but a quick Googling saw me through – in particular, when rebooting after the installation, I had to boot into safe mode (using the -f flag) so I could get all the way through the post-install setup process. Other than that, it was pretty smooth.

The Mini 9 runs OS X beautifully. I’ve been using the Mini 9 a lot over the last 2 weeks and haven’t run into anything that hasn’t worked.

One final point it may be worth making is that this is not a replacement for a full-size Mac. This is a netbook, and a compliment to an existing machine – don’t go thinking you’ll get the same experience you will from a full-sized MacBook, because you won’t. Rumours are that Apple may be creating their own netbook-like device to be introduced later this year. Time will tell whether this is true or not – I’d be very much interested to see Apple’s take on the whole netbook thing.

I was going to finish off by filming a walkthrough showing how well things run on the Mini 9, but Mr Andy Ihnatko does a sterling job of it himself: