My first impressions of Nintendo’s latest console and its flagship game.

It’s hard to separate the Nintendo Switch and The Legend of Zelda: Breath of the Wild when considering their relative merits. The two were released on the same day, and for most people the Switch is ‘just’ going to be a Zelda machine for some time due to its meagre launch lineup. 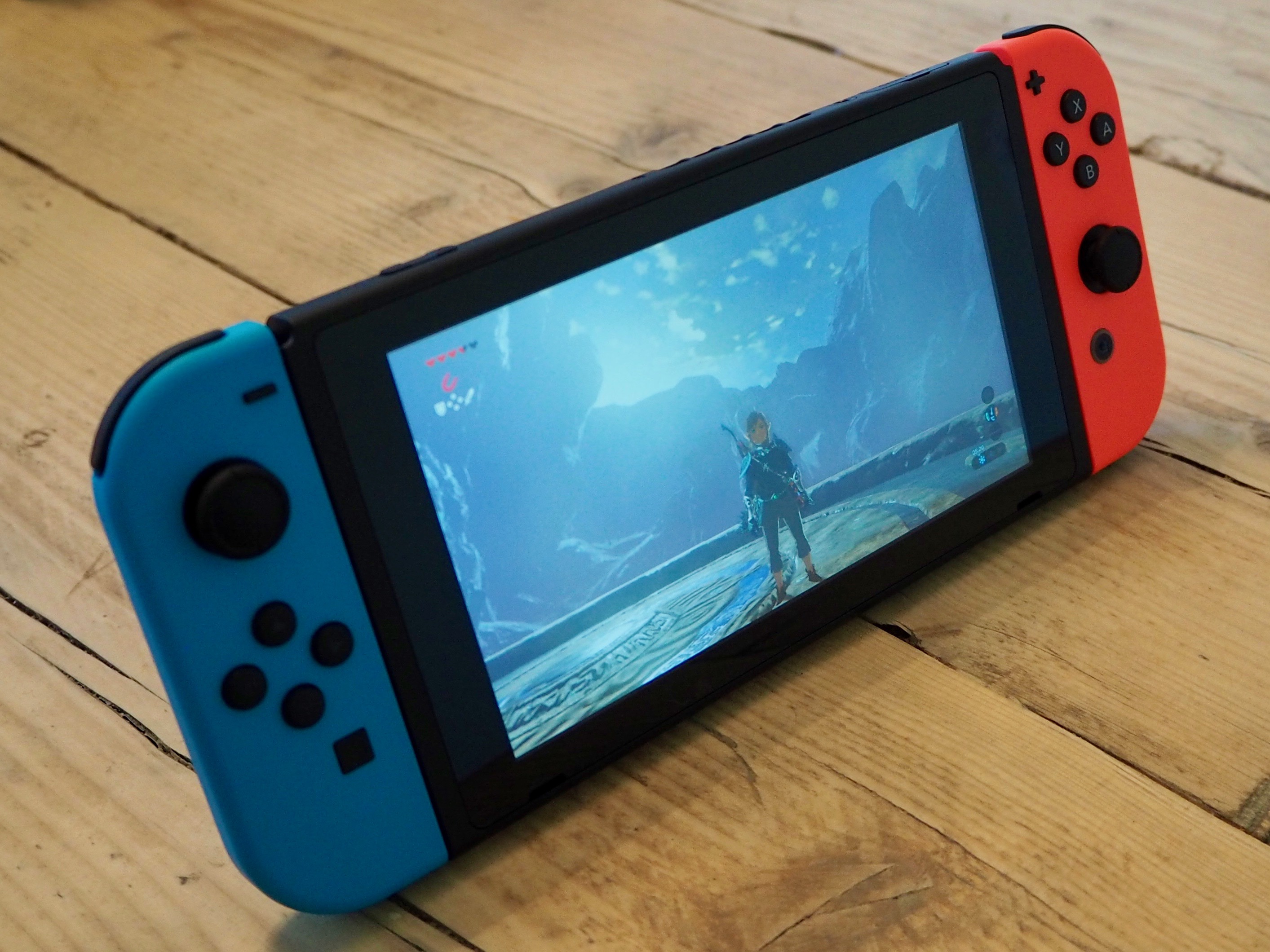 I originally preordered the Switch as soon as preorders were available, but ended up cancelling it shortly before the Switch’s launch. I was bitten 5 years ago by the 3DS – there were almost no games worth playing at launch, and then the system received a price cut of about 1/3rd just 4 months after it was released. Fool me once…

But then the Zelda reviews rolled in. Everyone who’d got a Switch already seemed to love the console, and Zelda was getting almost universal praise. Despite the Switch being sold out everywhere I managed to catch them in stock for a very short period at Nintendo UK, put in my order, and it arrived the next day. So how is it?

In my opinion, the Switch is the best hardware Nintendo has produced in 10 years, since the original Wii and the DS Lite. For the most part, it’s really well built and the design is minimal and unfussy. It’s nice and compact, but the screen and controllers are just about big enough. The tablet is also reasonably light and reasonably thin (here’s a comparison to the iPad and iPhone, if you’re interested). 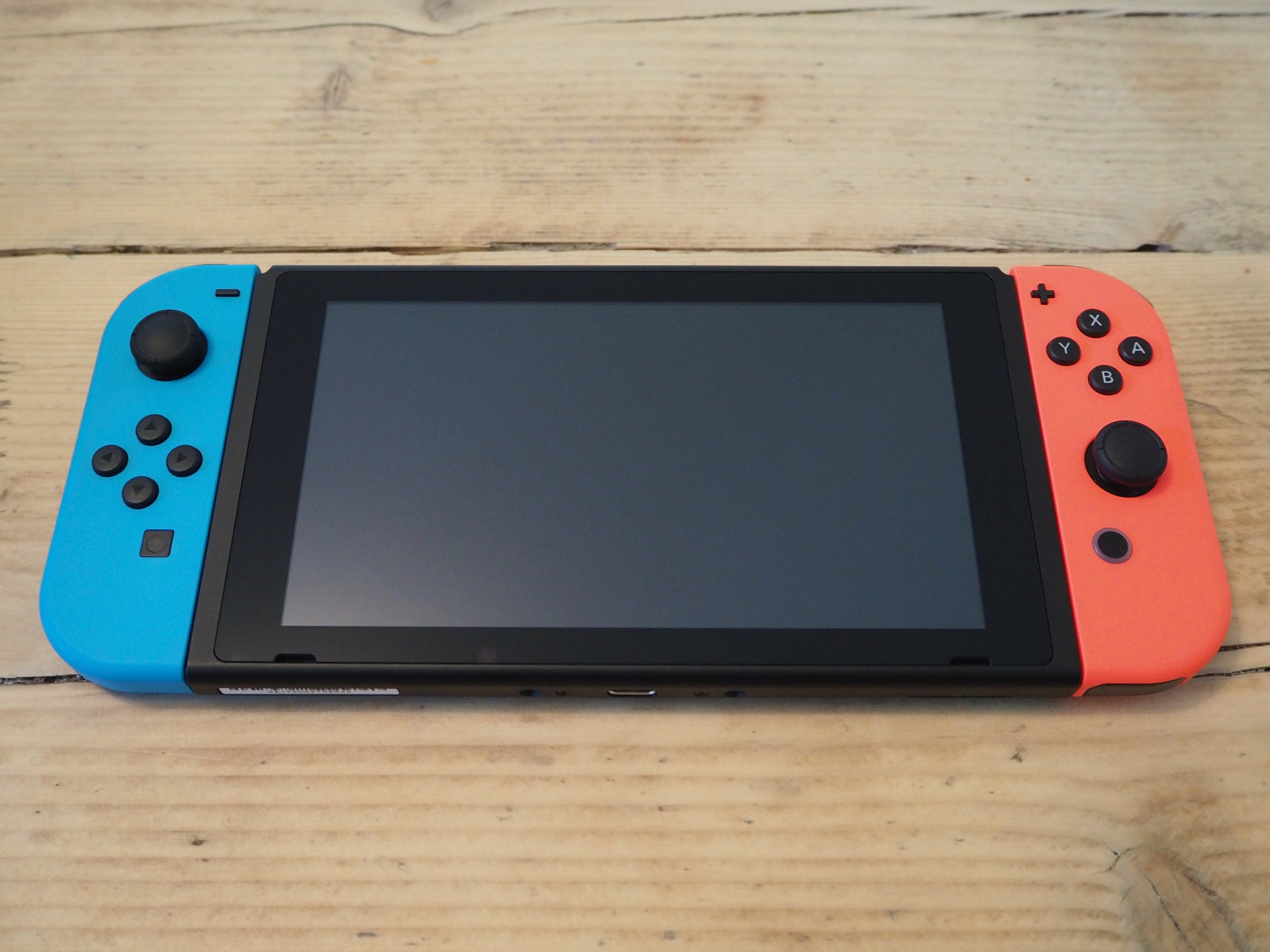 The 720p screen is high quality, and in a first for Nintendo it uses capacitative touch instead of resistive touch. It feels much more modern than the 3DS and the Wii U, both of which had terribly low resolution screens with large gaps between the display and the ‘glass’. It’s the first time I’ve been really impressed with a Nintendo display in a long time (or perhaps ever?).

The system software also feels much more modern than anything Nintendo have put out before. It’s got a very nice clean UI, without any of the ‘chintz’ that I typically expect from them – pinstripes, bubbley 3D buttons and the like. It’s also nice and fast, and feels like it’s actually capable of handling several tasks at once. The 3DS and Wii’s software always felt very modal to me; you had to stop one thing to do another. It certainly feels like a version 1.0 though, and I’m excited what Nintendo add to it in the future.

I think my favourite part of the whole system is its flexibility, which is of course the main selling point of the whole system. You can dock it and play on your big TV, or pick it up, slide in the controllers and play it handheld. Or you can prop it up, slide out the controllers and play it in ‘tabletop’ mode. Or stick the controllers into a grip and use them in a more traditional configuration. I’ve found myself switching between all the different modes and it feels great in each. It’s also really easy to switch between them.

The Joy-Con controllers feel nice in the hand, but can be a little fiddly. The shoulder buttons in particular are quite small and close together, and if you’re not using the controllers in a grip it can be hard to switch your fingers between them – there’s not quite enough to hold on to. That said, I do really like them (the neon coloured versions are amazingly bright – photos don’t do them justice), and the Switch’s flexibility means you can use them however is most comfortable to you: in a grip, held individually, attached to the Switch itself… There is also a ‘Pro’ controller available, which I haven’t tested myself but I’ve heard good things about.

I also think it’s utter genius that each console effectively comes with two controllers. When Mario Kart launches, you’ll be able to play two player local multiplayer right out of the box.

We only have one TV in our house, so I often find myself playing my PS4 via the PS4 Remote Play app on my laptop if my wife is watching TV. It works well enough, but of course a lot of visual fidelity is lost due to video compression when streaming. The Switch, then, is the perfect fit for me as it’s designed around this exact use case. The visuals are excellent when playing handheld. In fact, Zelda actually seems to perform better in handheld mode, with fewer frame rate drops but no noticeable difference in quality.

The only piece of Switch hardware that feels lesser quality to me is the TV dock, which is a bit of a disappointment. It’s a lightweight, slightly flimsy-feeling block of plastic, although I do like the glossy Switch logo on the side of it. The Joy-Con controllers are so satisfying to slide onto the Switch itself – they snap into place with a pronounced click, which is mirrored by a visual effect on the screen and a sound played by the system software.

The dock has no such satisfaction. There’s nothing to really guide the Switch into the right place and it just spongily makes contact with the bottom of the dock with a bit of a bounce. It never really feels like it’s in there properly. I wonder if Nintendo will improve this with future revisions. 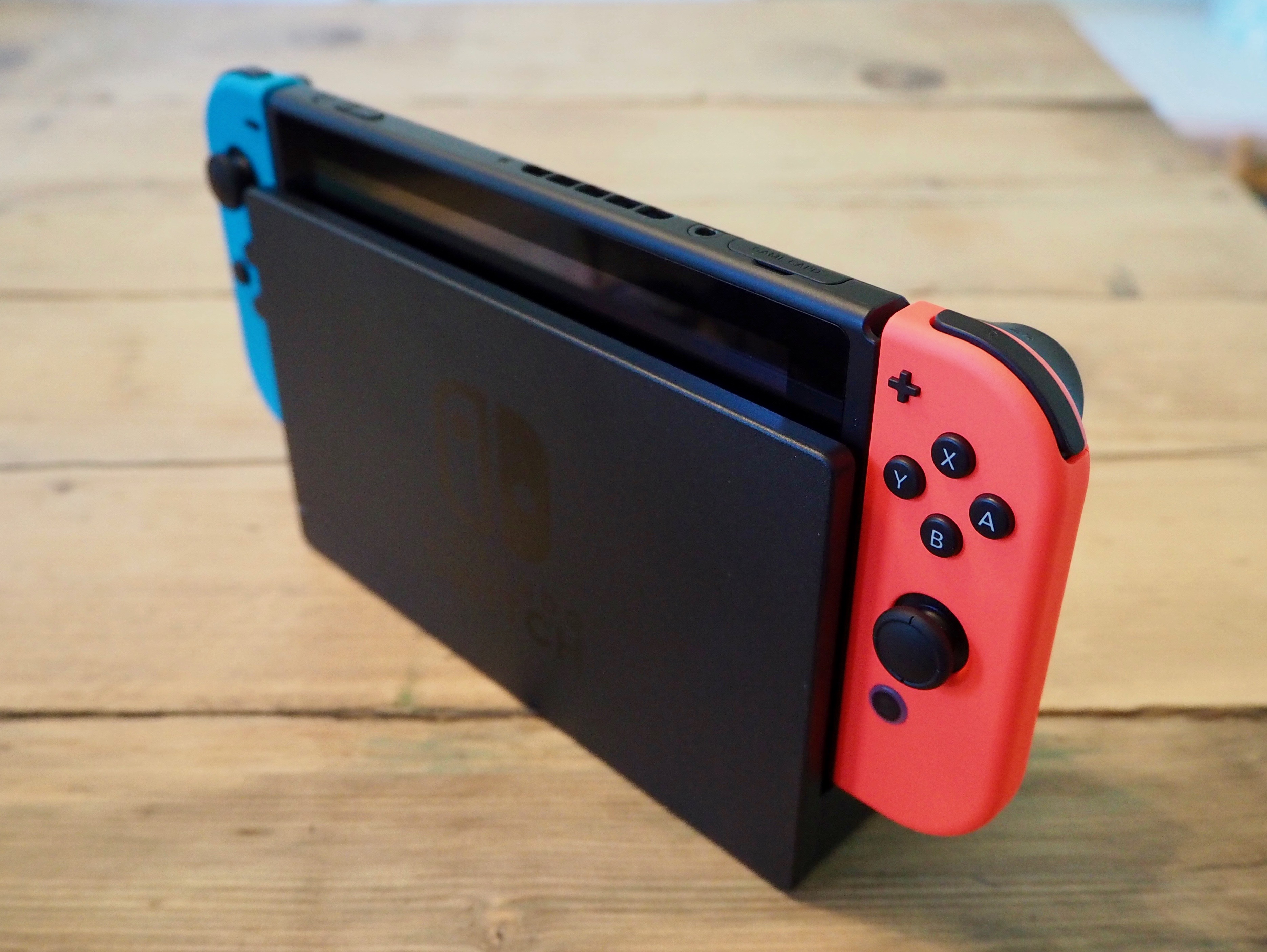 Whilst reading my first draft of this post, I realized I forgot to mention the battery life of the Switch. That’s because so far it’s never been an issue for me. It’s far better than I was expecting, and I’ve never found myself running out of battery when I want to keep playing.

The Legend of Zelda: Breath of the Wild

Zelda is the Switch’s flagship game, and by all accounts is a real system seller. And with good reason. It’s excellent. 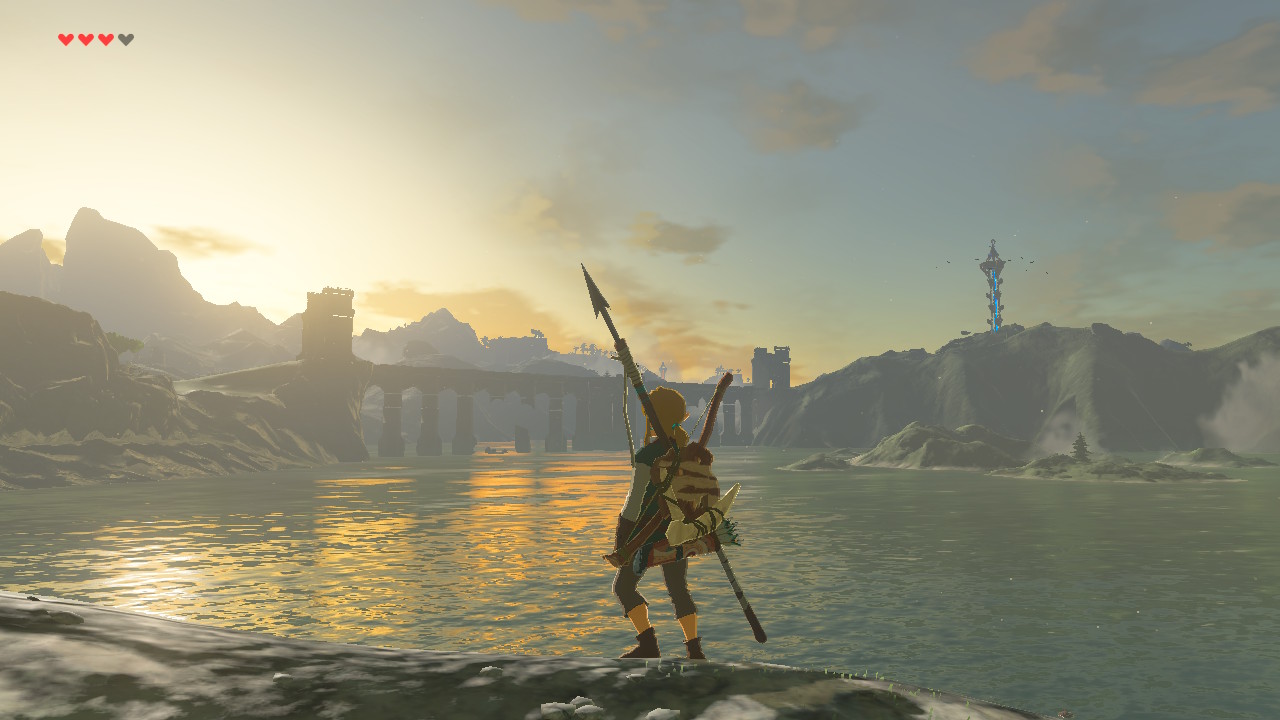 It feels like a Zelda game, but it’s also completely different from any other Zelda game. Pretty much from the get-go, you can go anywhere, tackle anything in any order you want, and there’s no hand-holding. The world is big. You won’t believe just how vastly hugely mindbogglingly big it is. There’s always somewhere new to explore, or some side quest to get lost in. The world also has a really interesting physics engine behind it all, which opens up all sorts of possibilities for combining different items. Shoot an arrow through a campfire into a tree and the whole thing will go up in flames. The joy is in the emergent gameplay that crops up through these interactions.

The game’s openness works really well with the Switch’s flexibility and portability. The system sleeps and wakes instantly, so you can carry this vast world around with you and drop in and out whenever you like. And if you feel like it, you can play it on the big screen too. I can see myself dipping into this world for many months (or years) to come.

I will say that whilst I am absolutely loving the game, I don’t think I agree with all of the 10/10 scores it’s been receiving. It’s definitely a 9/10 and probably even a 9.5/10, but I think it’s slightly let down by a couple of issues. It’s technically impressive what Nintendo manage to pump out of this small portable device but after just finishing Horizon: Zero Dawn on the PS4, with its lush, richly detailed landscapes Zelda feels a little lacking in places. For example I’ve come across mountain peaks with very low model and texture details: smooth domes with quite low resolution textures smeared across them and no extra set dressing. It’s perhaps a little unfair to compare the two games, but it doesn’t stand up to Zero Dawn‘s incredible world.

Objects also pop in and out of existence at a little closer distance than I’d like. You’re able to get a telescope-style zoomed view to look at the landscape around you, but it’s hard to scope things out when any enemies that may be in the distance don’t get rendered. You’ll also occasionally see super low-polygon versions of structures that are a long way off. The world is certainly beautiful, and moments regularly crop up that make me just stop in my tracks to admire the scenery. It’s just that these technical issues occasionally do crop up and break the spell: 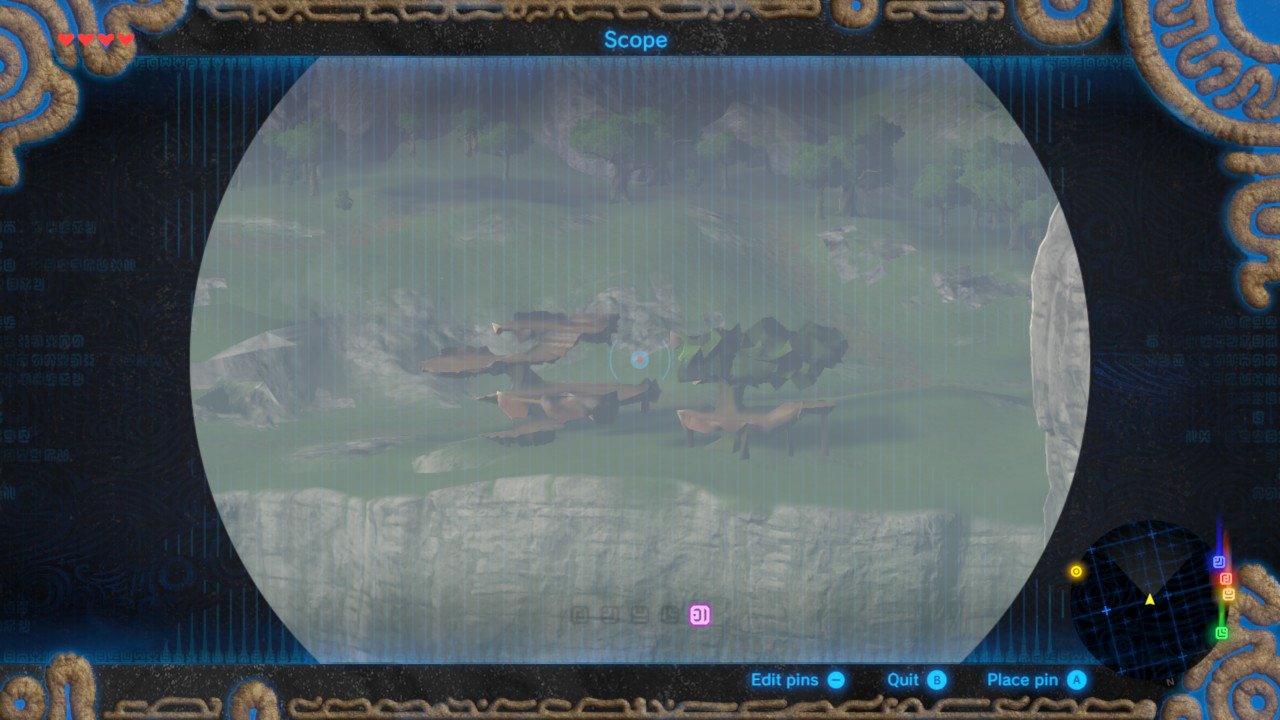 I’m not going to say too much more, because I think the fun in Breath of the Wild is all in discovering things for yourself. If you like Zelda games you definitely need to play it. If you haven’t played them before, you should definitely give it a go.

I’m really pleased with the Switch. The hardware is pretty perfect for a first revision. It’s very well built and well designed. Nintendo have finally produced hardware and software that stands up there with modern mobile devices, and it’s exciting to see where they’re going to take it. Having one device that works seamlessly from your living room to anywhere-else-you-want-to-use-it feels exciting and new, and it works exactly as it’s supposed to.

Zelda, too, feels like something new and is the perfect accompaniment to the Switch.

I really hope the Switch is as successful as Nintendo need it to be, and that they (and third parties) continue to support it with great games.